It's been a long 17 year hiatus but the Lord Nelson Owner's Association (LNOA) is back in operation.  Our goal is simple--to make LN ownership more fun.  One way of doing this is to improve the lines of communications between members.  This newsletter, the Admiral's Log, is a big part of that effort.  Most of the stories below are just snippets.  If you want to know more mouse on 'Read the whole story.' at the snippet's end.  To contact any Association member directly all you need do is look them up in the Captains List.

The Admiral's Log will report, hopefully quarterly, on what's happening on the LN waterfront.  But to do so we need to hear from you.   It's simple, send an email saying what you've done, or what you're doing, or even what you're thinking of doing to LNOA.org@gmail.com.
So, without further delay, on with the show... 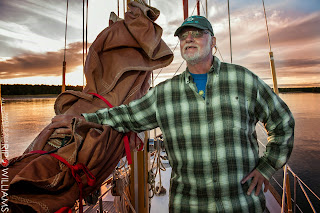 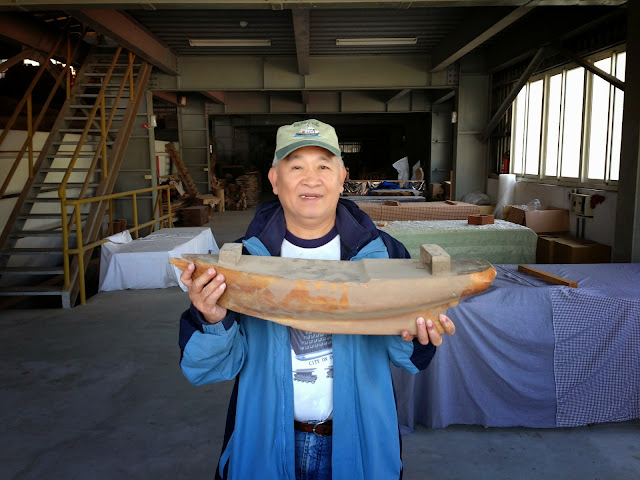 In this picture Tommy Chen holds the original yard model for Ta Chiao's CT41 sailboat.  Over 1000 CT41s were built and this was the first production boat on which Tommy worked.  Have you ever wondered where the LN41 design came from?  It's an interesting story.  In the 1970's Tommy Chen designed a 41 sailboat that he could cruise around the world.  Later, in the 1980's, when he and Loren Hart decided to go into business together they reworked Tommy's 41 design making it more appealing to the U.S. market.  Thus the LN41 was born.  Read the whole story. 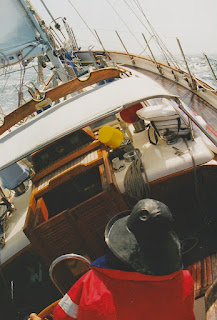 Peter Nordlie, ex-Fair Winds 41LN10, has owned both an LN sailboat and a Victory Tug--the only person other than the Harts to have done so.  In this article Peter talks about sailing across the Atlantic 1-1/2 times.  Making it only halfway across the Atlantic means there was more than just a little excitement involved!  Read the whole story. 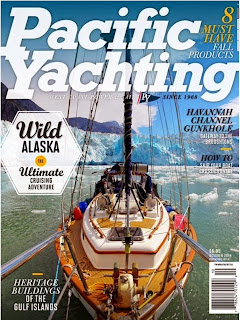 This LN35 graced the cover of October 2014's Pacific Yachting.  Anyone know her name and owners?

Mary & Bill Makepeace, Gray Max 35LN06, write, Since 2002 "we mostly cruise from Mazatlan, where we leave the boat for storm season, down as far as Manzanillo.  More recently we seem to be spending more time in La Cruz de Huancaxtle, around the north side of Banderas Bay from Puerta Vallarta. As for the name, Grey Max, we inherited it.  The original owner's name was Max; I've forgotten his last name, but he was from Bellingham, Washington.  We bought the boat from Steve and Janet Bondelid, who after cruising in Mexico for 8 years, trucked the boat back to Whidbey Island, where we purchased it.  We assume the original owner named the boat after himself and the fact that the hull is light grey. Wish I had a better story. Both previous owners sailed in Mexico, so we kept the name, thinking there might be name recognition once we were in Mexico, and have actually met a few people who knew the Bondelids. We cruised for a couple of summers, as far north as Desolation Sound in British Columbia and loved the area, but really wanted to be in a warm climate for the winter. Thus, the trip down the coast to Mexico.  Over the years, we have met 4 or 5 other LN owners. Mostly in the PNW. One at the Dry Tortugas in FL.  We prefer our lay out with the long settees, with lee cloths, which work well for long passages."

Here's a ghost ship mystery that together we may be able to solve.  Tommy Chen tells of an LN41 that was abandoned in the mid-Atlantic.  The crew, apparently in a hurry to get off, left the companionway open.  Months later the crewless LN41, still afloat despite the open companionway, made its way to Bermuda.  There, so the story goes, a marina manager notified the owners who, having washed their hands of the boat, transferred title to a third party.  It's a good story and there may be some truth.  Can anyone shed any light on it?

Tom Fish, Voodoo Child 41LN23, is just finishing up a two year refit that left no system untouched.  If all goes as planned Voodoo Child will be relaunched this month.  Here Tom talks about what he'd like to do next with VC: "I have been to the [Florida] Keys 4 or 5 times but unfortunately not by boat yet. That will be my next major cruise when VC gets back in the water. I'm hoping to get down there in late spring. Our route would most likely be a crossing from Pensacola to Tampa and then down to Captiva and Sanibel.  From there we would head south and duck into Shark River (hope it's deep enough) before crossing to the Keys.  Not sure yet which path through the Keys. I rented a shallow draft power boat in the Keys once and really enjoyed the remote areas in the "back country" north and northwest of Sugarloaf Key. Wish I could get VC in there but it's too shallow.  In fact I'm not sure there are many places outside of Key West that I can go. Maybe a run out to Dry Tortugas for a couple of days. I heard it can be pretty challenging down there in a deep draft sailboat with all the shallows. Lots of lobster pots too. But it'll be worth it. My mouth is already watering thinking about the wonderful churrasco we had at a Cuban restaurant called El Meson de Pepe."  Tom would be happy to share his experiences and technical know how, feel free to contact him at tfish@mchsi.com.  Read the whole story. 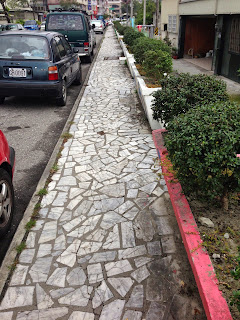 What do the sidewalks of Hualien, Taiwan and our tugs have in common?  The marble that adorns them both came from quarries near the Taroko Gorge World Heritage site on Taiwan's east coast.  Read the whole story. 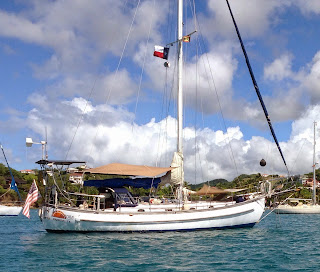 Ted Boodry, Aurora 41LN17, is currently in Prickley Bay, Greneda and living on the hook.   He's been actively upgrading his wind and solar power systems.  Special thanks to Ted for passing along his list of LN owners.  It is a huge help in the ongoing effort to assemble the fleet.   Read the whole story. 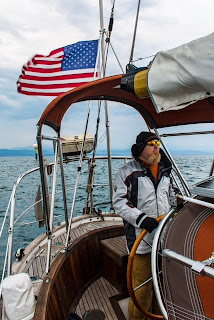 Kavenga 41LN25 checks in, "My husband (James Downar) and I (Heather Brignull) bought Kavenga in October 2012.  We moved onboard on day one and have been loving living aboard ever since.  It would be great to meet some other LN owners..." 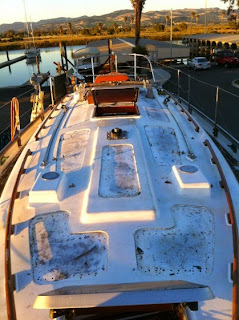 Bob Catlow and Betty Minson, Lady Nelson 41LN54, left Maine this summer and have been slowly cruising south.  They report, "We will leave Vero Beach, FL about Feb. 8 and spend some time in Biscayne Bay, some of the keys which will include Marathon and Key West.  Then we will go see the Dry Tortugas and cruise up the west coast of FL.  We have met some LN41 owners and have seen each others boats.  Fun for all." 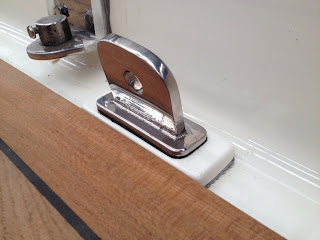 As a young man Tommy Chen spent two years in Los Angles working for Hans Christian Yachts diagnosing and repairing problems.  What an advantage for Lord Nelson yachts as they incorporate all that he learned.  For an example look no farther than the LN stanchions.  Their design eliminates leaks below decks.   Read the whole story.. 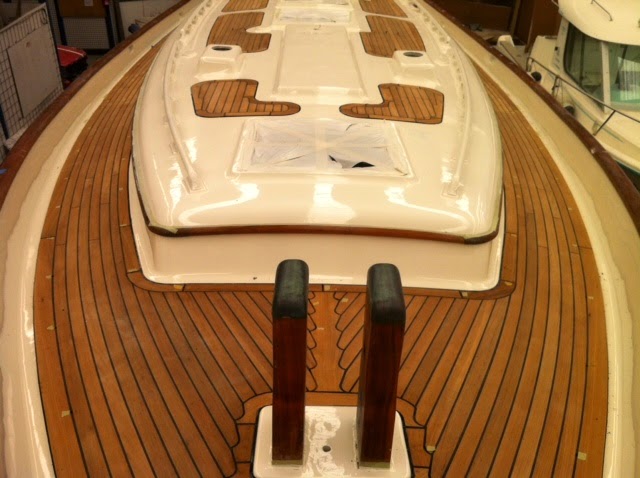 Donald and Patricia Dorn-Lopez are having new teak decks put on Embla 41LN14 in Vigo, Spain.  The Spanish quote was about 40% less expensive than a comparable quote from a yard in Denmark. The original LN deck was 12mm thick. The new deck will be 15mm thick and is applied in such a way that no mechanical fasteners are used. Donald reports that all the holes in Embla's deck were filled and the deck re-fiberglassed before the new teak was put on. The new deck is only one job being done in Embla's current refit.

Peter Rossi, ex-High Cotton 41LN40, had this half-hull model made. 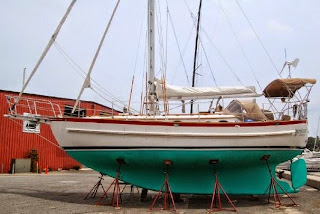 Welcome aboard Don Carten of Cheshire, CT, the new owner of Penrose 35LN16. When asked about his plans for Penrose Don said, ". . .does a sailor need plans?"  Good point. 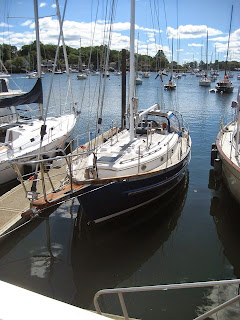 Papiola II 35LN14 is back in the water and looking mighty fine after hurricane Sandy.  According to her owner Carlos Nunez, "All cosmetic, but yeah, it was extensive... bowsprit, rail, hull paint etc. but I was able to sail her to the yard that did the repairs, never took water inside and the mast was still standing...so very strong, you can depend on these boats."  [the above was excerpted from a 10/16/2013 LN FaceBook posting--ed]

Hurricane Fun Facts.  Two Lord Nelsons have been lost to hurricanes: Fre-N-Eze 41LN08 and Afaran 41LN46.  Several other LNs have been sunk by hurricanes but were subsequently refloated. 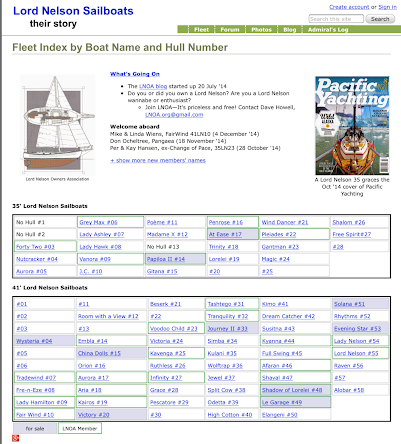 You've reached the end of this issue of the Admiral's Log, but not to fear, there's lots more available online.  Here are some quick Links to LNOA resources: Website  Blog  Forum  Captains List  FaceBook
This issue of the Admiral's Log was made possible by Peter Rossi, LNOA's Editor Emeritus, ex-High Cotton, 41LN40, and by our two roving reporters Sally Seymour, Sally W. 37VT42 and Betty Minson, Lady Nelson 41LN54.  Please tell us what you're doing and feel free to send comments to LNOA.org@gmail.com.

Until Next time, Dave Howell
Aboard Nellie D. 37VT63, in Key West, FL