Steve Olson is the New Owner of Jean Anne 35LN20

Just in from Steve:

I will be spending the next two years on a refit (although the boat is in very good shape), as I will be casting off from Seattle in 2019 for Mexico, the South Pacific, and possibly a circumnavigation (it would be the 2nd time around for this boat!).  =)

Steve
Posted by Unknown at 6:25 PM No comments:

The following is a lightly edited email from Carl Miller, Saphria 35LN23.

Well, Saphira is back in her [Hawaii] mooring, about 30 miles each way to the yard. I did replace three thru hull fittings at this time. Total cost about $2000 counting the very expensive yard bill; 11 hrs labor charged. Based on the good condition of the thru-hull made the same way as the one that failed, I do not think the others in the boat require immediate replacement. But I will give you a rundown of each of the three since they each have a separate lesson learned.

I was unable to obtain either Groco or Perko fittings that have the built-in flange. The new fittings we installed with a 3/16” thick fiberglass backing plate, using 3M 4200 sealant inside and out.

1. This is the head discharge, the valve that broke. It is 1¼” valve fitting but connects to 1 ½” hose. (Disregard the plastic n=bilge hose). The shaft thatbturns the ball has rotted (dezincified) and the part that engages the ball had virtually disappeared. 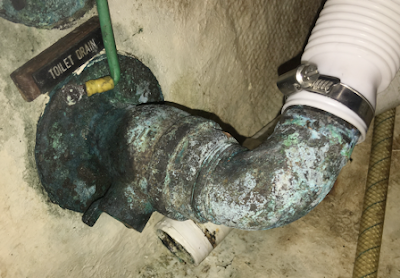 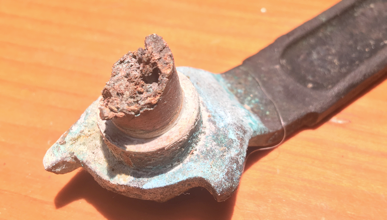 Here are the guts to this valve. Note the slot in the ball where the shaft is supposed to engage. I wire brushed the ball, originally it was chrome plated but the plating was all gone, or covered by sealife crud—see separate photo. Even if the ball could have been turned the Teflon seals were chewed up by the roughness of the ball surface.

Somebody [John Mackie of John William 37VT68] mentioned these valves are not “full flow” --boy is that an understatement. Look at the reduction of the pipe size in the photo below—start with 1.25” ID pipe size (1.23 in2), then the nominal flow is a 1” diameter (.79 in2), then with the crud build-up in the ball which is pretty normal in a head discharge, the dia is .8” (.5 in2)— so the flow area of the valve is reduced by a third by the crud, and the nominal flow is already reduced by a third by the valve design. This doesn’t even consider the reduction from the 1½” ID of the pipe that is carrying the sewage. Use less toilet paper!

The hole in the hull was cut ¼” oversize for this valve, a mystery. The one above for ¾” thru hull (1” dia thread) is even more oversize. Here’s a photo of these holes and the hull thickness is clearly visible. I didn’t measure it but a safe estimate of the hull thickness here is 5/8”. 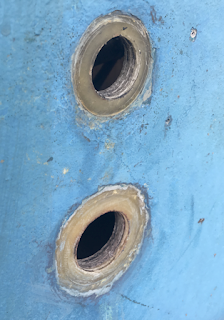 Hardest part to find was an elbow with 1½” hose and 1¼” pipe thread.

2. Now for the shower sump drain. This is a ¾” thru hull of the very same construction as the larger 1¼ valve described above. Since it was not damaged (note zero corrosion on the shaft) I was able to disassemble and see its interior design and condition. Happy to say that this valve could have stayed in the boat—it was on perfect condition except for the mineral buildup causing roughness on the ball. Plus there was a little slop in the handle which made it impossible to open the valve to full open as seen in the photos. Although the valve would still have worked, I am happy to have it replaced.

Here is how it works—the shaft has a square section on the end, this engages a slot in the ball and allows the turning motion. The shaft has a “head” which makes up to a Teflon seal inside the valve body; another teflon seal is on the outside under the spacer and handle, and the nut draws these to a seal. The ball is slipped into the valve body as the square section engages the slot. The valve interior has another Teflon seal both top and bottom of the ball; the top “nut” fitting makes up that seal, and has the pipe threads for the hose connection. No lubricating fittings. Electrical bonding was completed using a screw tapped into the valve body flange. 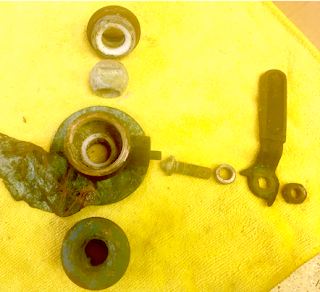 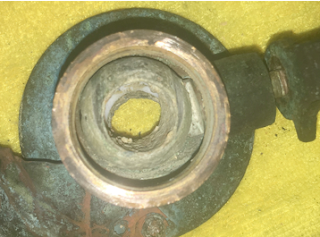 The toilet intake valve was also replaced. It seemed OK functionally, and it a more “modern” ball valve construction, but caution led to take it out and “look-see” It wasn’t any trouble to remove! Yikes only tree threads engaged the valve body to the thru hull. This was a result of the ¾” thru-hull threads being cut off too short; instead of a backing plate and a nut whoever installed this used a large brass washer and screwed the valve down to the washer and it is a wonder it held together. It is replaced with a conventional strainer thru-hull, with fiberglass backing plate and large bronze nut, and the new valve is threaded thereon.

In the photo you can see how little thread held this fitting into the boat—scary! Once again we found a problem BEFORE it happened at a bad time.

We could have reused this valve—it is perfectly functional-- but I will clean it up and keep it for a spare.

Pictures of completed installations coming on a few days.