Wow, that was fast.  It's already time for another issue of the The Admiral's Log?  Sure enough, the trees are starting to turn and the sun is setting ever earlier. Summer is leaving us in her wake.

A hearty welcome to our new Association members: Mauro Tangianu, Peccatore 41LN29; Jerry and Cheryl Bular, J.C. 35LN10; and Jan Chapman and Sean Kelly, Solana 41LN51.  Jan Chapman wrote to ask if it's too late to join as they have Solana up for sale.  Heck no; once a Lord Nelson owner always a Lord Nelson owner!

Speaking of Solana, Jan repoprts that they just brought her home to Annacortes after eight years in San Diego.  They've purchased a Kady Krogen and plan to cruise her to Alaska.

Cheryl Bular, J.C. 35LN10 writes: We are so "in love" with our Lord Nelson. She has treated us very well. We were live aboards for several years sailing her through the Caribbean waters to Venezuela. We now sail her in the Great Lakes.  Looking forward to hearing from others in the group.

While doing an Internet search for Lord Nelsons I came across a very good blog, Sailing Uncharted Waters, A Sailing (Mis)Adventure. It's the story of Tashtego 41LN31.  More specifically it's about embracing a challenge and stepping out of the comfort zone.  This is exactly what the Bergeron/Warren family did when they took a year's hiatus, sold the house, bought Tashtego and cruised her to the Caribbean and back. Not only can you read about their adventures but David Lyman, Afran 41LN46, made videos (see links below) of Tashtego's crossing from Newport to the British Virgin Islands.

As we went to print last quarter Tom Fish's Voodoo Child 41LN23 was struck by lightening.  Tom was concluding a multi-year refit.  I'm happy to report that he's taken it in stride and is now in the process of removing and repairing all the electronics, most of which he'd recently installed.  In an email Tom asked about the Lord Nelson's ballast, specifically what it was made of and how it was installed.  Below you'll find the answer as it was told to me by Tommy Chen.

As always, write when you can--your friends want to know what you're up to (LNOA.org@gmail.com).

Last month Tommy Chen showed me his original, vellum Lord Nelson 41 and 35 drawings.   What became the Lord Nelson 41 Tommy originally called the Seagull 41.  It's interesting to note that he drew these plans before starting his own yard.  It's also interesting that the name of his first yard, Hai O, means seagull in Mandarin.

When Plan B Becomes Plan A 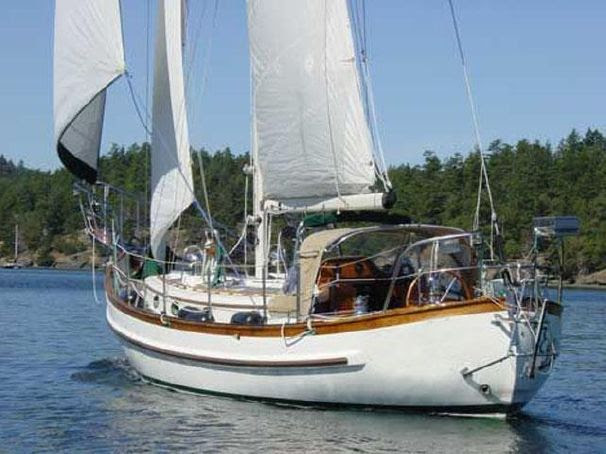 Jan Chapman and Sean Kelly have sailed and owned boats for many years.  In the early days, like many, they chartered.  Their fondest memory is of Sue Lynn 41LN51 which they chartered in the San Juan Islands. So much did Sue Lynn capture their imagination that owing a Lord Nelson became their Plan A.  Many years later they bought a 1979 CHB trawler.  This wasn't exactly Plan A so they named her Plan B.  They sold Plan B having convinced themselves that 'charter is smarter'.  Then, completely by chance, a yacht broker showed them a sailboat named Equilibre--it was the old Sue Lynn.  Plan A had come to fruition.

Video: Newport to Bermuda on a LN41

David Lyman, Afran 41LN46, made the following two videos of Tashtego 41LN31's trip from Newport to the Caribbean via Bermuda. They're a lesson in blue water cruising and sure give a sense of what the trip is like.

David can be reached at:

Types of Ballast and How it was Installed

Lord Nelson sailboats came standard with cast iron ballast but there was a lead ballast option. Tommy Chen said you can tell which ballast material was used by the depth of the bilge (as measured from the floor boards).  A lead ballasted boat will have a deeper bilge than a cast iron ballasted boat.  Because lead is denser, and therefore a lead ballasted boat will have a lower center of gravity, less volume of lead was used--thus the deeper bilge. Tommy said that 5.2 metric tons of cast iron or 4.2 metric tons of lead was used.   The manner of ballast placement depended on the type of ballast used.

For a lead ballasted boat, the inside of the keel was first covered with a slurry of dry sand and heat resistant resin.  It was critical that the sand be dry and so the yard had a special, large wok just for heating sand.  Tommy assured me that this was a different wok from which meals were prepared ;-).  Lead pigs were then tightly stacked inside the keel.  Finally, molten lead was poured into the keel fixing everything into place.

The iron ballast was sand casted, off site by a subcontractor to shapes specified by the yard. Three separate castings make up the ballast for a Lord Nelson 41.  After the castings were placed inside the keel a sand and resin slurry was poured around them to lock them into place.

The following is from Tom Fish, Voodoo Child 41LN23 (tfish@mchsi.com) 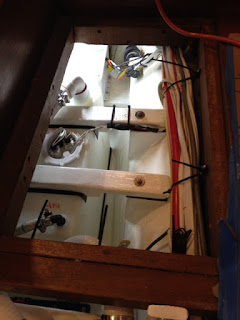 As part of my refit, I installed 2 sumps with self contained pumps and float switches, one forward and one aft. The normal sources of bilge water on VC are the anchor locker with deck opening for the windlass and the fore and aft air conditioner evaporators. I applied a white epoxy resin coat throughout the anchor locker and glassed in a drain system that is plumbed to the forward sump. I also ran the forward AC evaporator drain line to that sump. The aft evaporator is plumbed to the aft sump.

The next big challenge was the enormous amount of residual water that would drain back into the bilge from the oversized bilge pump hoses after the pumps shut off. The hoses are 2" internal diameter and connected to high volume pumps and 2" thru hulls. There is enough residual water in the lines to fill the entire length of the bilge to nearly 1/2" deep. The setup is designed to slow the rise of water if a major leak occurs and works in conjunction with 2 high bilge water audible alarms.

I thought I had solved the residual back flow problem by putting in check valves. However, 3 weeks after installing and testing this new system I was shocked to see it fail on a repeat test. The huge column of residual water above the check valve put so much back pressure on the valve that even these massive pumps couldn't prime and start pumping. Centrifugal bilge pumps like these are designed to self prime against a zero pressure head. Once primed, though, they are very powerful. So the check valves were removed and the pumps now prime instantly and perform like fire hoses. 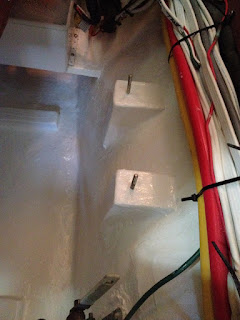 This still left me with the problem of 1/2" of residual water in the bilge after the large pumps stopped.  I used a small Whale diaphragm pump on manual switch with small diameter tubing and an extremely shallow homemade strum box placed in the 4" x 8" recess in the bilge. My strum box has a small ball bearing that seats on a small o-ring forming a low resistance check valve. Since the check valve is on the suction side rather than the pressure head side and is light weight, the pump has no problem priming. The result is a bone dry bilge and the 4"x 8" recess pumps down to near zero which can be blotted completely dry with one paper towel. After achieving a dry bilge I painted it with white bilge paint and installed LED downlighting. Now it will be very easy to inspect the bilge for any leaks.


I spent last night tied up alongside for the first time in 3 years. I am the victim of deferred maintenance and procrastination.

Several months ago, I decided to change the oil. Though the engine hadn't been run in a couple of years a change seemed like a good idea. Crank, crank, crank.... no joy. Shorten story, no fuel going to injectors. Pull injector pumps and find one is well and truly bound up. Pull injectors too and catch ride on another boat going to Trinidad, where these things can be rebuilt. (Grenada sends to Trini.) Much procrastination over tedious job of pump re installation. Shop manual warns "Don't drop the spring into the crankcase". Of course the spring is at the rear of the engine. Get all back together and fire it off. Runs OK but leaking fuel from several joints using reused crush washers.

Trip to states and return with plenty of the 3 sizes of washers require. Attack the task with so much gusto that I twist off one of the return line banjo bolts. I found a lathe to borrow and an operator and we spent 2 days and got a usable looking replacement. It wasn't a hard job, we just aren't very good machinists. Lost confidence in my crafted product and went to a machine shop where, in about 2 hours, after a week involving local holidays and higher priority jobs, the guy turned out 2 very good looking bolts. Jumped on the job yesterday to find that they were about .10mm oversize for the banjo part of the line. Polished that down with a flat file in the cockpit and all is together with no leaks.

In the testing/starting process something went awry with my drip less shaft seal. If the vent tube is any indicator, the stationary part of the seal made about 8 revolutions, before everything started to slip. Nothing seems to be broken beyond repair, but the bellows is not properly seated on its carbon ring and there is a pencil sized stream of water running in. I'm tied to the fuel dock til Monday am when I'll find out when I can haul and see how big this breadbox is.

To unsubscribe from this newsletter please reply to this email with 'Unsubscribe' in the subject.