The following is from Tom Fish, tfish@mchsi.com 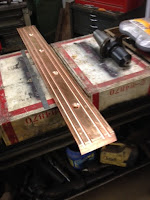 I wanted to share with you what I did for lightning protection on Voodoo Child. There are a lot of theories out there on the "best" protection setup. Some are very elaborate and expensive (and awkward and ugly) with still no guarantees. Others are more simple DIY methods. I have not read everything out there on the subject. But from what I've read, it seems most sensible in my situation to at least create the straightest possible low resistance electrical path from the top of the mast to seawater. I gave up on the idea of being able to protect built in electronic devices by turning the entire vessel into a giant "Faraday cage".  The electronics are too sensitive and lightning is too powerful and unpredictable. My main concern was to direct the brunt of the charge down to seawater expeditiously and hopefully not via the thru hulls which could potentially blow out and sink the boat. 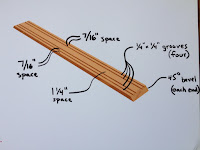 From the masthead to the deck, the best conductor is obviously the aluminum mast itself.  Unlike many boats with exposed bolt-on keels, the Lord Nelson has an encapsulated keel. In this situation the consensus seems to be that the base of the mast should be wired directly to a copper plate outside the hull rather than to the encapsulated keel. It was recommended that the minimum size of the copper plate should be one square foot (more in fresh water) and have a large amount of edges which help dissipate the charge into seawater. It was also recommended to use at least number 4 wire to connect the mast base to the grounding plate with no sharp turns in the wire. 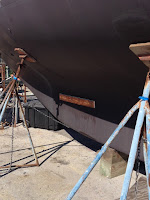 I had my copper plate fabricated by a machinist out of 3/4" thick copper bar. It was 4" wide by 36" long (1 square foot). I had several grooves cut into it lengthwise to create more edges. The ends were tapered to make it more aerodynamic. Four countersunk holes were drilled along its length allowing bronze bolts to attach it to the hull. The un-grooved side facing the hull has a 1/2" threaded dead-end hole cut into it. I had threads cut into a 1/2" copper rod and used that as a stud which screws into the dead end hole in the plate. The other end of the copper stud penetrates the hull (near the mast) and has the ground wire clamped to it. The reason I used a separate threaded copper stud for the ground wire is because it's electrical conductivity is higher than the bronze bolts holding the plate to the hull. 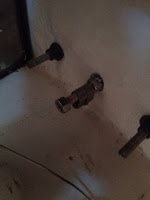 The number 4 grounding wire starts at the copper stud in the bilge within inches of the mast support pedestal.  With very little bend, it traverses upward through the compression post, mast deck plate and mast. It terminates about a foot up the mast where it bolts directly to the interior surface of the mast on the aft side beneath the wire cover plate. I have a small plugged hole in the cover plate at that location for future inspections for corrosion at the connection.

Posted by Unknown at 9:30 AM No comments: 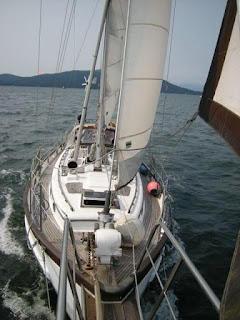 Spring Moon just came up for sale on Yacht World.  I'm guessing that she's hull#22.  Anyone know for sure?

Thanks, Dave Howell
LNOA.org@gmail.com
Posted by LNVT Owners Association at 9:20 AM No comments: