Welcome to Vol. 2 CE (current era) of the Admiral's Log.  We went out of production for a few years, ok, 17 years, and with apologies, to our Editor Emeritus, Peter Rossi, ex-High Cotton 41LN40, contained herein is the latest reincarnation.  Most of the stories below are just snippets.  If you want to know more, mouse on 'Read more>' at the snippet's end.  To contact any Association member directly all you need do is look them up in the Captains List.

About 40% of the Lord Nelson fleet has joined the Association.  If you see another Lord Nelson, or know of one, please tell them about the LNOA.  The more members we have, the more knowledge we'll have to draw from.

Bicki and I finished up the winter by crossing our wake in a circumnavigation--of southern Florida.  Hey, you've got to start somewhere ;-)  Our three month route took us from Naples to Key West, to Miami, to Ft. Lauderdale, to Stewart, to Ft. Myers, and then back to Naples.  It seems very strange to be back in Maryland, where boats are just now being commissioned, to have left Nellie on the hard in Florida.  It's going to be a long summer without her.  Like me, there are other armchair sailors in serious need of some boat stories.  Help keep us from going stir-crazy by sending a line or two to LNOA.org@gmail.com.  Tell us about what you've done, or what you're doing, or even what you're planning on doing.  I'll make sure the word gets out.
So, without further delay, on with the show... 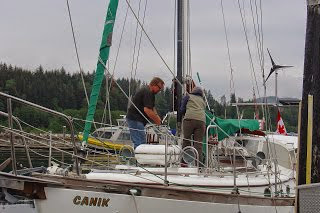 John Moir (jwmoir@gmail.com) and his partner Pam Hastings have been looking at both Lord Nelsons and Hans Christians. They hope to purchase a boat sometime later in 2015 or in 2016. 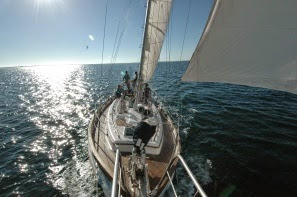 From Tom Fish, Voodoo Child 41LN23: I'm curious as to what, if anything, other owners are doing for lightning protection. Voodoo Child was struck a few weeks ago while on the hard and suffered major electrical and electronics damage all of which had just been installed during a 2-1/2yr refit that was nearing completion.  Read More >

BMW D50 Parts for the Asking

Also from Tom Fish: Voodoo Child 41LN23:  I recently re-powered during a major overhaul and now have to find a home for the old BMW...  Although its still listed for sale on Craigslist for the general public, for a Lord Nelson owner it will be "free to good home". tfish@mchsi.com 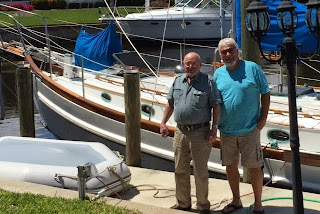 Mike Wiens, FairWind 41LN10: Yesterday Linda and I hosted the reunion of Peter Nordlie and his former boat, FairWind.  There must have been some dust in the air because as Peter first spied FairWind through our back door his eyes began to water. Skipping the idle chit chat we went directly to the boat. Through Peter's eyes, actions and words his, fondness for FairWind was obvious. Read more >

From Donald Dorn-Lopez, Embla 41LN14: I am currently lying Vigo, Spain waiting for a front to pass and for northerly winds to set in. Sometime this week, I will set sail for the Canary Islands with a local Spanish crew member. I plan to cross the Atlantic in May, to arrive before Hurricane season. If all goes well, we will have Embla in the Chesapeake this Summer.  [May Update: Embla completed the passage between Spain and the Canarys and still plans to depart for the US in late May. - ed.]

From Thomas Scott MacGregor:  I am the proud owner of hull 35LN27, the last 35' Lord Nelson. What an amazing vessel we have in the LN! I am pleased to see we owners have started to collect together here. It is my hope to hook up with you all out on the water.  When I got "Free Spirit" I knew that I wanted a real blue water cruiser... And I fell in love with her form but now that I have been her master for two years, I have learned just how fine a craft we are lucky enough to command!   If you wish to see a short viddy of me ship on youtube. 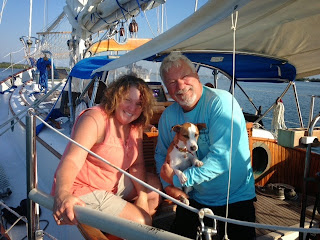 Mike and Linda (and puppy Riley) have owned FairWind for seven years. Mike and Linda met in college. He had just graduated and she was a cute sophomore. Together they built a successful heating and air conditioning business. Along the way two children, a son and a daughter, came along. Good thing, the kids now run the business while Mike and Linda play. And these two know how to play; if they're not sailing FairWind then they're flying their Bonanza.  Read More > 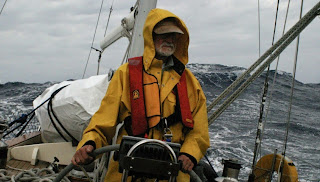 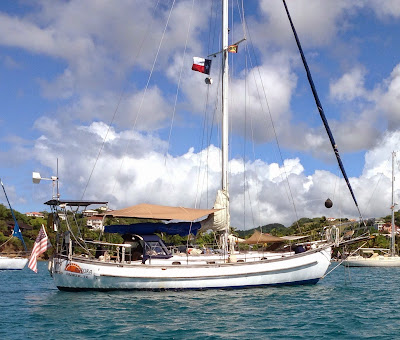 Ted Boodry, Aurora 41LN17 writes: WX here has been cold [in Prickly Bay, Grenada, West Indies - ed].  I am shutting hatches down to sit on the dogs after dark and sleeping under a light blanket. Really miserable. I have been looking for the photos of Aurora, taken 3-4 years ago in Beaufort, NC. One has a ruler buried 7" deep in the snow on the cockpit table. The others only add to the ambiance. We swore then NEVER AGAIN! 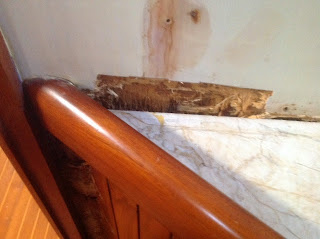 Anyone else not keeping up with the caulking on the counter behind the mirror?  Yes, the fiddle rail does come off. It is still in one piece. All this for failing to keep the seal between the marble and the bulkhead. 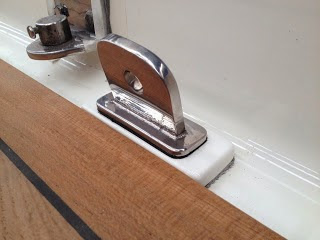 From Donald Dorn-Lopez, Embla 41LN14: I improved the chainplate mounts, by adding a fiberglass base to get the joint up out of the water channel and then welded on a stainless base (Hallberg Rassy style) to give further protection from leaks. I also learned that they must be sealed with butyl rubber and not polyurethane sealant! This is important.  Read more >
Lord Nelsons For Sale
Three 35's are for sale: Papiloa II #14, At Ease #17, Pleiades #22
Ten 41's are for sale: Wysteria #04, China Dolls #15, Victory #20, Grace #28, Journey II #33, Shadow of Lorelei #48, Le Garage #49, Solana #51, Evening Star #53, Lady Nelson #54

You've reached the end of this issue of the Admiral's Log, but not to fear, there's lots more available online.  Here are some quick Links to LNOA resources: Website  Blog  Forum  Captains List  FaceBook
This issue of the Admiral's Log was made possible by Peter Rossi, LNOA's Editor Emeritus, ex-High Cotton, 41LN40, and by our two roving reporters Sally Seymour, Sally W. 37VT42 and Betty Minson, Lady Nelson 41LN54.  Betty and Bob have Lady Nelson up for sale in Annapolis.  They will be missed out on the water.

Please send any and all comments to LNOA.org@gmail.com.
Until Next time, Dave Howell, Nellie D. 37VT63, Church Creek, MD