What would become the 41' Lord Nelson (41LN) started out life as Tommy Chen's dream sailboat.  Ever since he was a teenager Tommy wanted to sail around the world.   He can't remember the exact date but it was in 1977 or 1978 that he began in earnest to put his ideas on paper.  He completed the 41 design one year later.

Among the many factors that Tommy credits for the success of the 41LN are, the two years he spent in Los Angles, CA (1975 and 1976) as Hans Christian's (HC) trouble shooter and, a book he read about Jiro Horikoshi's Zero fighter plane.  In LA he got to see the problems on lots and lots of sailboats.  From this he learned first hand what worked and what didn't.  From Horikoshi he learned the importance of aerodynamics, specifically how surfaces can be designed to minimize drag.

After returning from LA, Tommy opened the Hai-O Yacht Building Corporation in January 1977.  Hai-O is Chinese for seagull; a bird revered for its intelligence and aerial maneuverability.  His primary customer was HC and he built the HC 38Mk II.  Two other yards in Taiwan were under contract to build the HC43 and the HC38T.  HC wanted their hull numbers to all have the prefix XSA.  The specific yard was identified by the next three numbers, Hai-O's was XSA004.

Back in the US Loren Hart was moving up the ranks in HC.  From 1977 through 1980 he ran Seattle's HC dealership.  Then, around September of 1980 he received an equity position in HC and he and Lani moved to Long Beach, CA.  According to Lani Hart's December 2010 Victory Tug History:


After the move to Long Beach, Loren found the partnership constricting to his newly developed opinions on market trends, and boat design. This caused the relationship in the partnership to become very contentious. Through his elevated position as national distributor, Loren had established a close working relationship with the yard owners in Taiwan. One particular yard owner, Fu Yi (Tommie [sic]) Chen mirrored Lorenʼs newly formed opinions with regard to the boating market and was independently developing a new hull design.

Tommy's dissatisfaction with HC was concurrent with Loren's.  After long talks Tommy and Loren realized that their's was an ideal match,  Loren wanted to run his own company building something he believed in and Tommy had a yard plus a good 41 design.  Again from Lani's Victory Tug History:


For this new design, Tommie [sic] needed a sales representative in order to create capital for actually building the design. While Loren liked Tommie [sic] and respected his building expertise, Loren knew the design would not sell as is. Together they formed an alliance and fine tuned the design into the 41ʼ sailboat, that launched Lord Nelson Yachts in 1981. 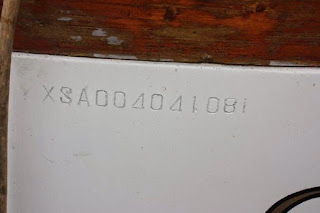 The above was written after a telephone conversation with Tommy Chen, 1 August 2014 -- Dave Howell, Nellie D. 37VT63